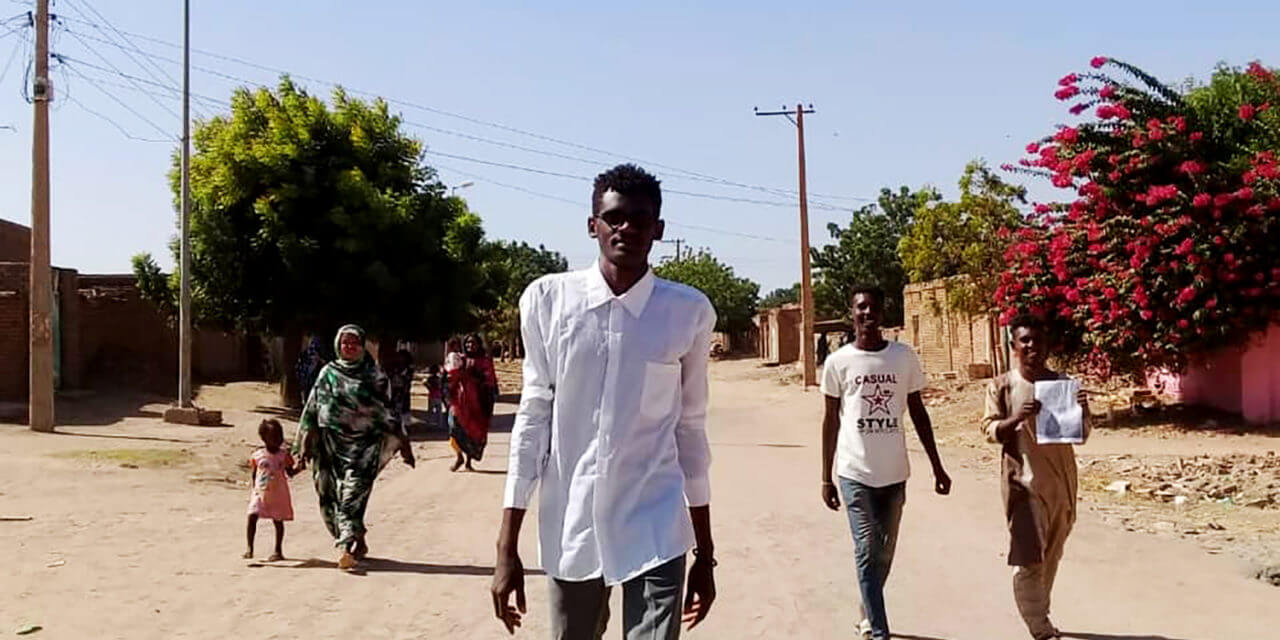 Sudan’s civil society has firmly survived 30 years of suppression under Bashir’s regime and played a vital role in the uprising that led to the former president’s removal from power.

The former regime in Sudan, under the leadership of President Omar al-Bashir, was notorious for its clampdown on dissenting voices, limiting the independence and freedom of action of civil society organisations, human rights defenders, students, the media and members of the political opposition through policies of control and restriction.

Despite this entrenched repression, the Sudanese continued to establish and sustain civil society movements and secure their continued existence.

The season of revolt that ended Bashir’s rule in April 2019 and led to the formation of a transitional government in September 2019 featured a multitude of organisational forms ranging from professional associations and umbrella political alliances to neighbourhood committees and other civil society initiatives, all offering support and solutions to various political, economic and social issues. These initiatives formed the cornerstone of Sudan’s revolution.

As violent repression started to rain down on the courageous popular struggle that began in December 2018, Sudan’s civil society, at home and abroad, needed to act immediately.

‘Hadhreen’, for example, was formed in response to the first government violence against protestors in the city of Atbara. It was initiated by Bakri Ali, a Sudanese engineer who lives in the United States of America, and Nazim Sirag, a famous activist who was arrested several times by the former regime for his active role in various civil society organisations. However, Sirag never engaged in political activism.

Since then ‘Hadhreen’ has supported the injured revolutionaries and ensured they receive treatment. The initiative has also provided material and psychological support to the families of the wounded and those who have lost a loved one. Through the work of ‘Hadhreen’ hundreds of injured protestors have received free treatment and dozens of families have been supported financially.

‘Sudan Bukra’ (the Sudan of tomorrow) is an initiative formed in the wake of the revolution by Sudanese media specialists and journalists mostly living abroad, to be a leading voice of the revolution. With over 50,000 followers on Facebook, the initiative helped to garner international solidarity for Sudan’s uprising.

The ‘Sadagaat’ and its partner organisation ‘Sadagaat-USA’, have focused on raising funds to support “charitable activities related to social welfare, healthcare and education”. During the General Command sit-in, ‘Hadhreen’ and ‘Sadagaat’ helped to finance and distribute food, water and sheets to the protestors who kept up their day and night protest for weeks.

But Sudan’s civil society initiatives did not only deal with the urgent direct needs of the revolutionaries. The ‘Ahmed el-Kheir Initiative’, founded by protestors during the General Command sit-in in memory of Ahmed el-Kheir, a teacher who died in February 2019 while in the custody of Sudan’s former National Intelligence and Security Service (NISS) in Kassala, has provided free painting and music classes, as well as school materials for homeless kids.

Or ‘SharAlhwadth’, a group of Sudanese youth who through their social media work help poor people to receive medical care. The initiative, already active for several years, helps poor patients to pay their medical bills. As Sudan’s blood banks suffer from an acute shortage of blood, ‘SharAlhwadth’ also helps people to find a matching blood donor. Volunteers work 24/7 in Sudan’s capital Khartoum and across several states to find donors via social media and to deliver received blood donation to the people in need.

Ayaa Shamat volunteers for ‘SharAlhwadth’. She has been working with the initiative for many years already. Shamat says: “Throughout the revolution, we continued our usual work supporting those in need – with a major difference: we had more injured people and more people who needed blood donations.”

Despite the organisation’s experience, given the significant increase of people in need of blood donations during the months of struggle, it was a mammoth task for the few volunteers willing to take the risks.

“We lost one of our volunteers (Ahmed Tabidy) who was killed in April (2019), and four of our leaders were imprisoned for providing medical support to the revolutionaries,” explains Shamat. “Even our Finance Secretary was locked-up for three months and only freed by the revolutionaries after the fall of Bashir.”

Like the volunteers of a diverse range of initiatives, the protestors themselves put their wellbeing, life and freedom at risk. Many protestors disappeared throughout the uprising. The search for missing relatives and friends, amidst the turmoil of the revolution, was a task the ‘Missing’ initiative set out to help with.

“So many people lost their relatives.”
Yahia Hussain

Founded by the scholar and activist Yahia Hussain, ‘Missing’ helps the families of missing persons in their search for their relatives and to investigate the causes and places of their disappearance. Hussain says the initiative started to become most active after the dispersal of the General Command protest camp. “So many people lost their relatives and didn’t find them neither in hospitals nor police stations. So we instituted this initiative to help in finding the people who were lost during the revolution,” explains Hussain.

Besides the search for missing people, the initiative also pushed authorities to look into the cases of disappeared people and “educated revolutionaries during marches and the sit-ins to carry their ID’s so they could be identified if they were lost”, says Hussain. “We also educated them on the steps they should take, if someone got lost and how to avoid being arrested.”

While various civil society groups, such as ‘Hadhreen’, ‘SharAlhwadth’ or ‘Missing’ were supporting protestors and their families, others worked behind the scenes, or on – at the time – seemingly less urgent issues. For example, Abdalla Abdelwahab, a 27-year-old software engineer, worked together with other volunteers on keeping channels of communication open.

Following the tragic events of June 3, 2019, the by then ruling Transitional Military Council (TMC), shut down the internet for almost two months, encouraging Abdelwahab to get on with his idea. “I started by gathering a few people who had a LAN internet connection in Sudan and other Sudanese who are abroad. The idea was to spread information about the urgent needs inside Sudan, whether it was a medical need, the need for electricity or airtime credit,” he says.

“We also worked on connecting people through text messages, to announce coming marches organised by the SPA (the Sudanese Professional Association). So basically people would get a message from an unknown source (blocked number) to tell them about the marches, to be careful in certain streets or where to find an open hospital,” explains Abdelwahab.

“The idea was to spread information about urgent needs.”
Abdalla Abdelwahab

And the diversity of issues addressed by Sudan’s various civil society groups is abounding. During the tense season of revolt, urgent matters needed to be addressed. Yet, some initiatives and people have kept their long-term outlook. The ‘Green Dream Organisation’, for example, tackles environmental issues, mainly planting trees and spreading awareness about environmental issues.

Despite the ongoing revolution, the organisation kept up its work. They planted 150 trees on the main General Command sit-in area in Khartoum – trees now standing witness for the struggle and sacrifice of the Sudanese people during the revolution. Since the organisation started its work, ‘Green Dream’ has planted almost 20,000 trees, according to Mazin Gamal, the organisation’s General Manager.

Last year’s political transformation in Sudan was, by all means, a great success. However, the nation still faces a multitude of issues, largely a legacy of a corrupt and militant regime that had been in power for 30 years.

“Unfortunately, nothing changed. We are still doing our seven days a week shifts,” says Shamat about her and her colleagues work for ‘SharAlhwadth’. The situation in hospitals is “still catastrophic, and patients are still suffering”, she explains.

Amidst a fragile balance of power and an economy in deep distress, Sudan’s transitional government is under pressure to deliver against high popular expectations. “Nonetheless, we are optimistic about the new government, and we hope it will care for low-income families. We also hope that the healthcare insurance systems will be amended,” Shamat says.

Sudan’s diverse civil society has played and will continue to play a crucial role in leading the country and its people into the future. While organisations such as ‘Green Dream’ continue to work for the Sudan of tomorrow, others are still dealing with the aftermath of the revolution.

“For now and for the foreseeable future the lost people of the revolution is our case, and we will continue our activities till we find each one of them,” says the ‘Missing’ initiative’s Hussain.

It is precisely this remarkable discipline, determination and courage of people like Hussain, Shamat, Abdelwahab, Gamal and all the countless other women and men often working silently, yet diligently in the background, that enabled Sudan’s civil society to not only survive 30 years of suppression under Bashir but also to provide urgently needed services during the revolution toppling his regime.