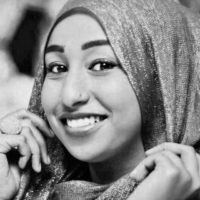 Mead graduated from the Sudan University of Science and Technology in Industrial Design in 2009, and from the Media Department of the Islamic University of Omdurman in Radio and Television in 2010. Mead also holds a Master in Radio and Television from Omdurman Islamic University. She has been working with Al-Mijhar Al-Siyassi newspaper since January 2015, as an editor in the news and politics section. Her journalistic work focuses on international relations and women's rights, in addition to the as well as artistic movements in Sudan, especially plastic arts.