A source of defiance: Sudan’s women 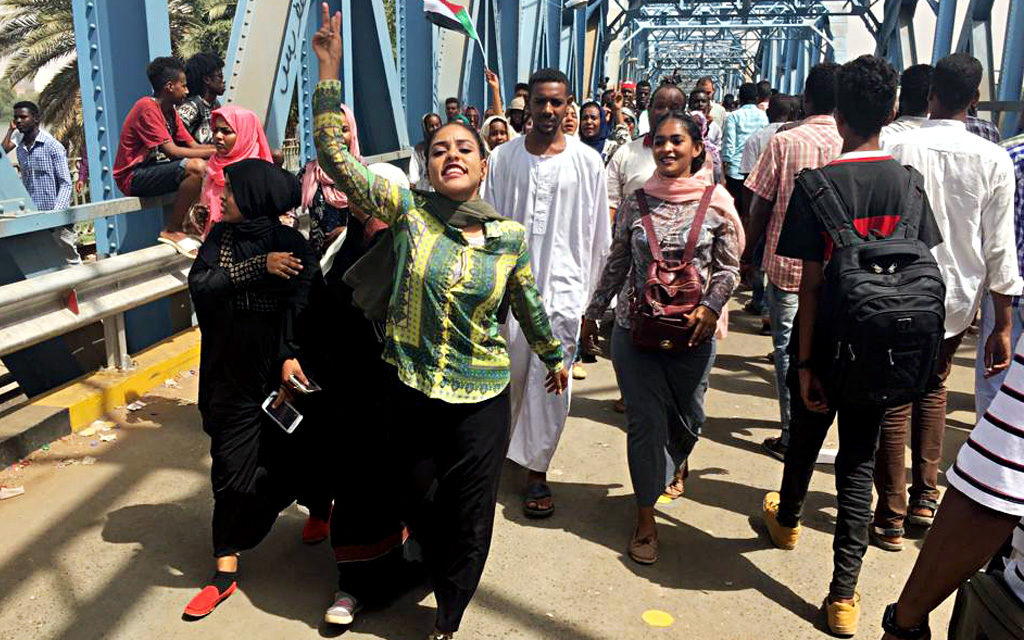 Women played a vital role during last year’s uprising, often at the forefront of the protests in Sudan. No wonder, comments Alaa Eliass, Sudanese women are known throughout history for being warriors – resilient and inspirational.

The history of Sudan tells many stories about the ‘Kandaka(t)’, which is an old Nubian word that means the ‘Strong Woman’. It was the title for queens and queen mothers of the ancient African Kingdom of Kush in Nubia, located at the Sudanese and southern Egyptian Nile Valley.

The first Kandaka, Amani Rinas, succeeded her husband and fought a fierce war against the Romans to gain her stolen land back. During her reign, the title Kandaka acquired a new meaning that is closer to describing the ‘Great Queen’.

The second Kandaka, Amani Shakheti, took the throne after the death of Amani Rinas. Both achieved prosperity and wealth for themselves and their people.

Inspired by these great and fearless queens, Sudanese women of all ages and backgrounds courageously led last year’s revolution that ended the 30-year-rule of Omar al-Bashir and his regime, and reclaimed the title Kandaka – a legacy of empowered women who fight hard for their country and their rights.

During the months of protests that swept across Sudan, not a single march started without at least one woman performing a ‘Zaghroda’ (a celebratory cheer sound) to announce the beginning of the demonstration.

As family caretakers, running the household and often also supporting their families financially, at times even as the sole provider, women bore the brunt of the dire economic situation and skyrocketing prices.

Women, most certainly, felt the former regime’s repressive policies the most – policies that discriminated, weakened and humiliated women. Suffering for decades from the Bashir regime’s bullying, women needed change.

One of the most humiliating laws, the Public Order Act, was ratified by the Sudanese government in Khartoum State in 1992 and then amended in 1996 before it was applied in all states.

The law included several articles and provisions that were deliberately formulated in vague language, to give the police and the courts a free hand in its execution.

Articles in this law stated that the police has the authority to arrest or physically punish (beat) any woman engaged in a ‘non-ethical’ action that doesn’t consider customs and traditions.

The apparent dilemma, there was no defined standard for what constitutes a ‘non-ethical’ action. Therefore, the law was used to terrify and humiliate women like Lubna Abdelaziz, a journalist.

The act also gave the police the right to arbitrarily arrest women, for example, tea sellers, arguing they disturb public order. This took away the income used to take care of entire families.

“I participated in the revolution because I couldn’t stand the injustice anymore,” says the 26-year-old activist Ebtisam Abdelrahim. “I went out asking for my stolen rights as a citizen and as a woman. We wanted freedom, a better life, and we wanted justice for our murdered brothers.”

Ebtisam regularly took part in the protests, until one day she was beaten by security forces and she ended up with a broken leg. “Every time we went out to the streets, particularly we women were met with brute violence. My leg was broken as a consequence of that violence,” Ebtisam explains.

However, given the decades of state repression that trickled deep into society, it wasn’t always easy for women to play an active role during the uprising.

“My family didn’t know that I was getting out to participate in the revolution at the beginning,” says Ebtisam, and when they got to know, “they didn’t agree”. Ebtisam added that many families didn’t want women to participate.

“My mother had the same point of view as me, and she was a tough defender of the revolution as well,” says Raneem al-Amin, an 18-year-old student. “But my father, like most other fathers, wasn’t pleased about our participation.” Raneem says she always had to argue with her father, “which was a very tough time for me”.

Opposition also came from women on the “other side”. While many women were protesting, it is also true that many were supporting the regime, Reem Gaafar and Omnia Shawkat write in a comment on AfricanFeminism (AF). “They praise the regime in homes and neighbourhoods and social gatherings.”

“The relatively conservative Sudanese nature coupled with poor education and ingrained obedience for the patriarchy makes it easy to attract and sustain this female support base,” Reem and Omnia explain in their article.

But despite the harsh violence, the opposition from their own families and other women, female activists continued to challenge the regime’s and the society’s oppression and power, sending two clear messages, according to Reem and Omnia: we are not afraid; we are not backing down.

Sudan’s protestors indeed didn’t back down, the Bashir regime fell, and a transitional government was formed – a victory for all Sudanese, sparking hope for more equality, especially among women.

“I am satisfied with many things that we achieved, but I sure hope to see more results,” says Eibtsam.

Raneem agrees with Eibtsam, however cautioning that the achievements need to be nurtured over time and become a “living reality”. “I hope Sudanese people will be patient enough to see them,” she adds.

For freedom, equality and justice to become an everyday living reality for everyone in Sudan, the struggle must go on. Counter-revolution elements within Sudan’s society pose an imminent threat to what has been achieved.

But, as a source of defiance, the women of Sudan will hopefully continue to withstand any backlash and bring about the desired changes the country and its citizens so urgently need.