The cradle of Sudan’s revolution 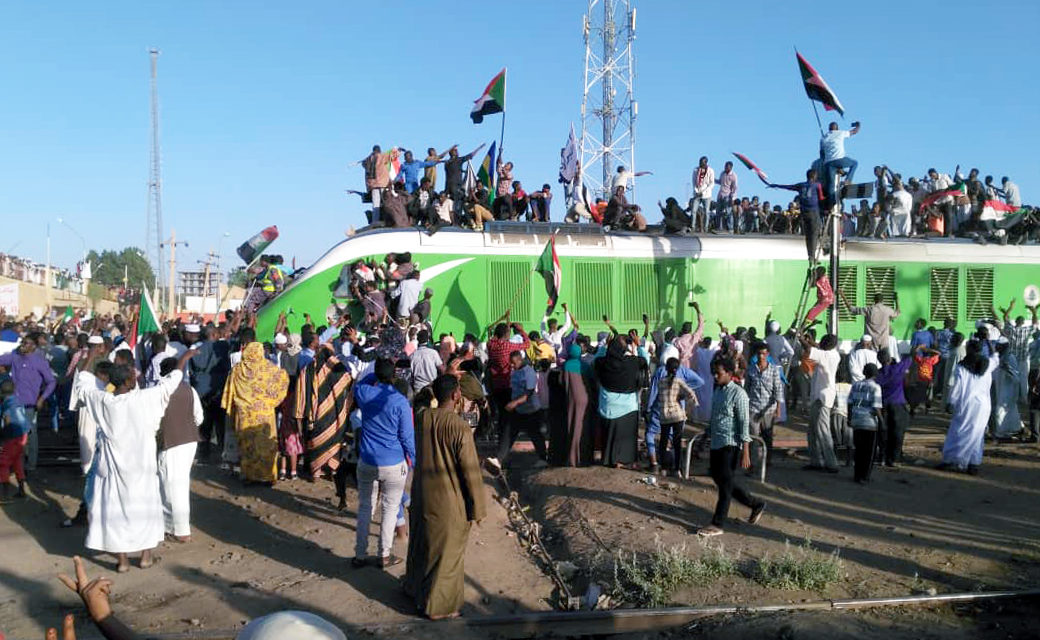 Celebrating the one-year anniversary of the Atbara uprising, which marked the beginning of the Sudanese revolution. (cc) AlAdwaa.Online | Idreis Abdallah | December 19, 2019

In December 2018, residents of Atbara sparked a national uprising that toppled long-time ruler Omar al-Bashir almost four months later. On the first anniversary of the Sudanese revolution, AlAdwaa.Online visited the city to speak with three people about the early days of protests in Atbara.

On December 18, 2018, students at the Atbara Industrial School couldn’t believe what they were told when they wanted to buy a breakfast sandwich. The owner of the school restaurant said to them that the sandwich price had gone up from SDG 5 to SDG 10. In anger about this price hike, caused by the government’s decision to raise the price of bread fivefold, from SDG 1 to SDG 5, the secondary school students in Atbara rose in protest.

The following day, hundreds of protesters took to the streets of Atbara against increased bread prices, after a three-week shortage and amid steep inflation. The police fired tear gas at the protestors attempting to disperse the unwavering protest. Some protesters chanted “no to hunger”, and in the act of defiance, angry demonstrators torched the local headquarters of the ruling National Congress Party (NCP) in Atbara.

A year later, during the first anniversary of the Sudanese revolution in Atbara, AlAdwaa. Online’s Idreis Abdallah spoke with three people about the early days of protests in their hometown:

Shehab Adel, a student of the Atbara Industrial School, is nicknamed the “leader” by his fellow students, who all agree that he was pivotal in sparking the initial protests on December 18, 2018:

“We went to the streets to protest against the sandwich price increase from 5 to 15 pounds, and in other stores from 5 to 10 pounds in Atbara. When breakfast time started at our school, we were told that the price of the sandwich has increased and we did not have enough money to pay for this increase. My fellow colleagues and I decided to demonstrate, and we started to chant protest slogans.

Mohamad, my school colleague, told me that we are few and that we need to go back to the school to ask other students to join. So we returned to the school, and we started to knock on the classroom windows until all students joined us and we all took to the streets and chanted slogans against the high prices.

While in the street, a significant number of students from the Nile Valley University, Faculty of Engineering, which is close to our school, joined us and the protests became bigger. We went to other nearby schools, and all their students joined us. For me, the turning point was when we went to the city’s market where citizens joined us as well.”

Ahmad Mohamed al-Hassan is the Director of the Atbara Industrial School, responsible for the school and the students where the protests – that took him by surprise – began:

“Students of the Industrial School took to the street to protest against the price increase and to mark the beginning of the end of Omar al-Bashir’s regime. When the students started to chant their slogans, we could not control them or stop them from leaving. When they left the school, the police fired tear gas at them.

However, the students continued to protest, and we could not control them. They went out again to chant their slogans against the government, and the whole city joined them.”

Emadelddine Osman, a student at the Nile Valley University, Faculty of Engineering and Technology, joined the protests on December 19, 2018:

“From the morning of December 19, there were many reports about school students taking to the streets to protest. My friend whispered in my ear while we were at the university courtyard that we should quickly join the demonstrations. This could not wait until the end of the university exams.

So we went to the Atbara Industrial School, and we found about 60 students putting barricades to block the streets, throwing bricks and burning tires. Several car owners were giving them gasoline.

That moment we realised the true meaning of the word ‘revolution’, an uprising in the real sense of the word. From our experiences, we knew that the security forces could be violent and arrest people, but to our surprise, they did not. They stood by and seemed completely powerless this time.

The most significant number of protesters was at a square in the city’s market, and tens of soldiers saluted the protesters without harassing them. At that time, students of the Faculty of Engineering and Technology were already organising the protests and coordinating the protest slogans. Among them was Tareq Ahmed Ali, who was killed on the second day of the protests.

Protests continued across the streets of Atbara and protesters chanted two main slogans: ‘[Atbara] rose, [Atbara] rose, we are out [in protest]’; and ‘The people want to bring down the regime’.

Later the protestors marched to the local headquarters of the National Congress Party. Some NCP members were present at the office, and they started to throw stones at the demonstrators. The ensuing anger triggered the protestors to burn the headquarters.”