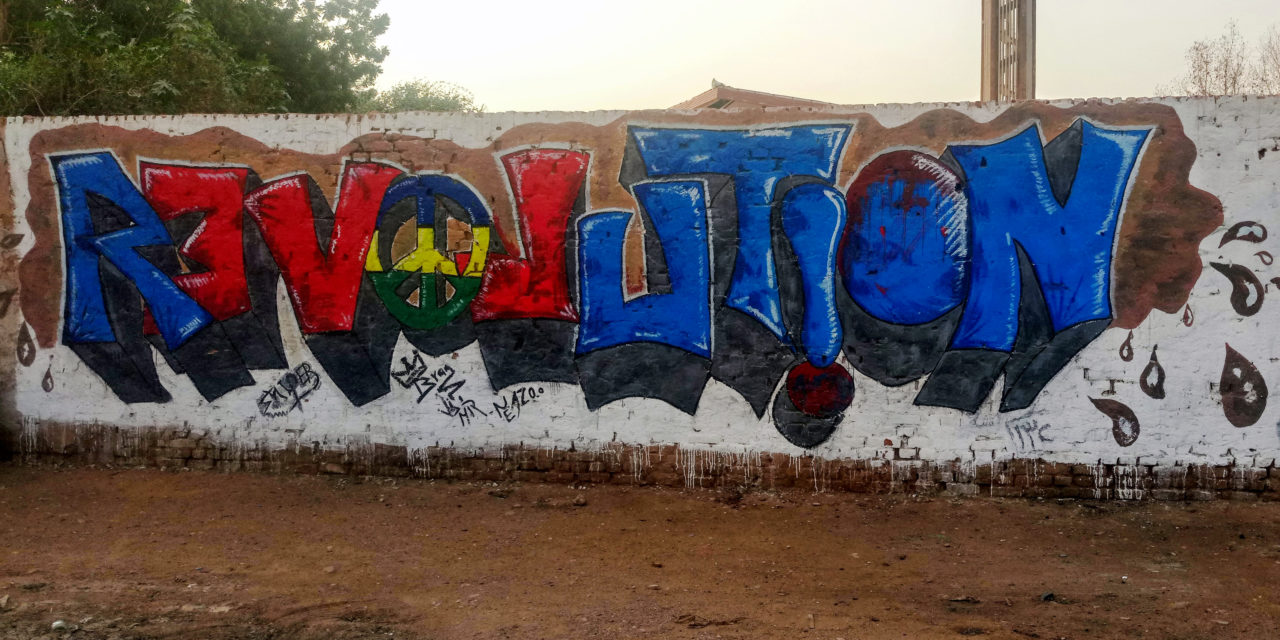 Since the start of the revolution in Sudan in December 2018, art played a significant role, not only during the protests but also later during the sit-in. Many artists, musicians, actors and other people with artistic backgrounds joined the people who took to the streets their longing for change. The protests were successful. In April 2019 the 75-year-old Sudanese President Omar al-Bashir was ousted, ending his autocratic rule almost 30 years after he took power in a military coup in April 1989.

During the first phase of the uprising, as people were protesting across the country, often chased by the authorities, it was hard to create and perform art in support of the revolt. Yet, many musicians would march alongside the protesters performing songs. Later, these individual musicians and other artists came together and formed bands, organised interactive projects with the protestors and much more. Graffitis, huge murals on Khartoum’s downtown roads, musical performances and street plays were a typical scene during the sit-in, side by side with political speeches.

“As the revolution began to surface, artistic activities took place inside the neighbourhoods. Murals were painted, musicians and singers performed, poets and actors participated in their respective residential area as a contribution to the revolution,” explains Faisal Hamid, a political activist and one of the art activities organisers. “After the 6th of April, and more specifically after the announcement of the end of al-Bashir’s rule, those activities were moved to the square and evolved into a movement.”

Artists started to collaborate, performing almost daily in certain areas and bands, groups and collective initiatives took off from there. Protestors on the square got involved in the production of artworks and supported the artists with donations and supplies. This support provided a boost to Sudan’s art scene and led to the creation of many active artistic initiatives.

“Some groups began to rise, such as “Safrajat”, which is a band formed by a number of musicians who met during the sit-in,” says Faisal. “The musicians were first contributing individually before uniting their talents. “As they were staying at the square, they occupied a certain place and performed almost every day for months.” Safrajat was present at the square until the unfortunate end of the sit-in.

“Since the 12th of April, I was in the square carrying my guitar. All of us wanted to express our passion for art during the sit-in – musicians, painters and others,” says Abdullah Mohamed, a member of Safrajat. “The most amazing thing is that it was not just us who created all the artworks – everyone at the square was part of it.”

“Everyone at the square was part of it.”

Mohamed Abdin, a musician taking part in the revolution, told AlAdwaa.Online that many great songs were “born” in the square: “Many amazing songs were written and performed there, inspired by the revolution’s vibes and being part of it at the same time. Not only musicians were there, actors as well, performing plays and one-man shows. In addition, photographers documented a great deal of the activities artistically,” says Mohamed.

“I was trying to highlight the importance of documenting all the activities of the revolution when I spoke with people,“ says Rami Magid. “As a photographer, I was involved from the start. Along with others, we held a workshop to teach people in photography basics and how to document the revolution safely.” He added that they even received funding to conduct the workshop, and ended up supporting the protesters with most of the money.

“It was a unique experience, indeed. It was almost as if a new Sudan was born – the one we wanted and fought for,” Rami says. “Art was our tool to contribute to the revolution, and all the artists there were sharing that vision.” Mohamed adds: “We wanted to state that we were staying in the square protesting, that we will not move until our demands are met.”

“It was almost as if a new Sudan was born – the one we wanted and fought for.”

The revolution, most certainly, had a strong unifying force and after three decades of little artistic liberty provided a long-overdue space and freedom to create. Seeing art in action during the uprising also revived Sudan’s desire for art.

When paramilitaries moved in to disperse a protest camp in the centre of Khartoum in June and killed more than 120 people, most street artworks were destroyed, photographers lost their equipment and data, and musicians lost their instruments. After the break up of the sit-in, authorities covered most of the street murals. But all the material loss meant little, given the lives lost and physical suffering endured by many protesters on June 3.

Artists were no exception, suffering along with the other protestors. Many were arrested and later physically and psychologically abused, leaving them scared and heartbroken. However, the abuse and suffering endured didn’t break their determination.

Since then, they have continued with creativity and talent to promote peace and raise awareness on critical transitional issues. “The sit-in inspires many of the current projects,” Faisal says. One example, according to Faisal, a campaign to create murals in various neighbourhoods in Khartoum, “especially in the areas that played a major role during the revolution”.

The murals depict late heroes of the revolution in their respective home neighbourhoods, as a way to support their families and loved ones, and assuring them that their sacrifice would not be forgotten.

Another successful project by a group of artists that was formed during the uprising takes care of homeless children in Sudan’s capital. The group provides shelter and food for the kids. The artists also share their skills, helping the kids to channel their creativity and develop their talents.

One of the most ambitious projects yet to be accomplished is to travel to other states, starting with the regions most affected by years of violent conflict, and take the spirit of the sit-in to those who suffered the most. Faisal is hopeful that under the new government, they get the opportunity to realise this plan. “The sit-in created a unique atmosphere where all people collaborated as one and united for a mutual goal. We want to take that same spirit of unity to those who suffered from war to show our compassion and care,” he says.

Many of the artists say the revolution was not just a political one, but also a social and cultural revolution – and the process is still ongoing. The collective commitment to foster and advance this transitional process through artistic means in Sudan is not just unbroken but thriving.