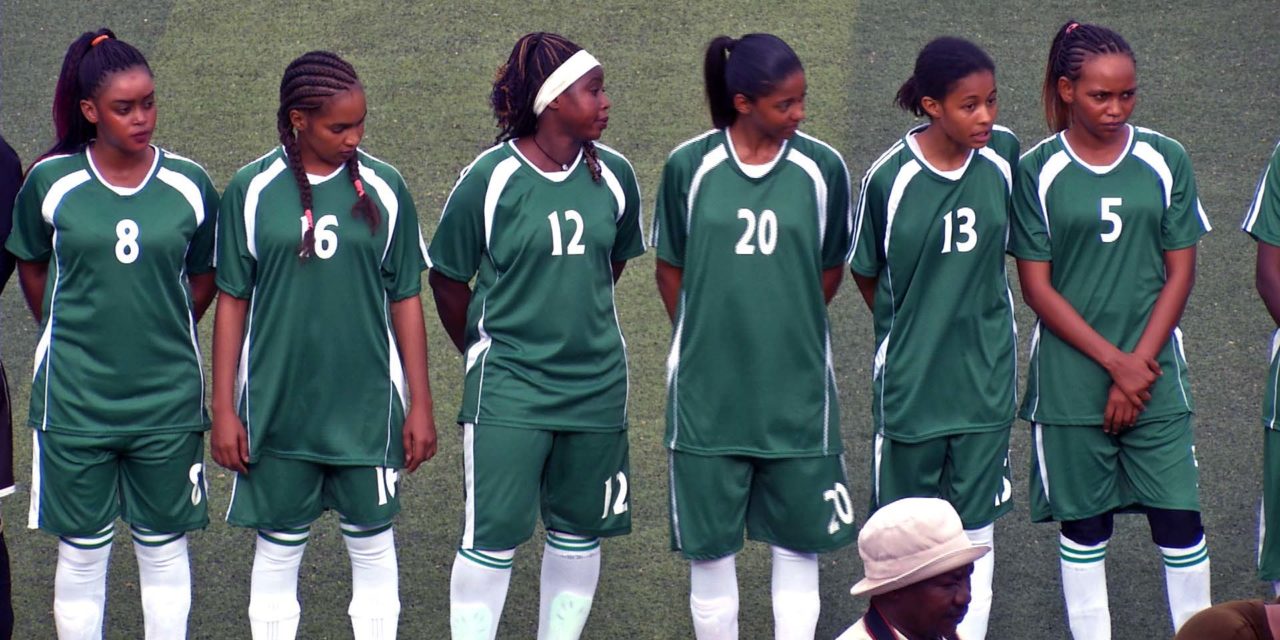 In Sudan, female football players face prejudice in a society where the sport is not traditionally seen as a feminine pursuit.

On September 30, 2019, something that was unthinkable for the past 30 years took place in Sudan’s capital Khartoum: the first women’s football match. Only two days earlier, the launch of the women’s football league in Sudan was officially announced at the Corinthia Hotel in Khartoum. Twenty-one teams representing nine local associations take part.

At 4:00 PM, the whistle of the referee signalled the start of the first women’s league match between the Al Tahadi (Challenge) and Al Difaa (Defence) teams in the Khartoum International Stadium. Players of the two teams, wearing green and yellow jerseys, turned the page on decades of repression, embracing a dream that was before impossible to achieve.

“It was a dream, and it was realised,” Nedal Fadlallah, one of the Tahadi team players, told AlAdwaa.online right after the match. She said that “the real victory is that we were able to play in the stadium as Sudanese women while before we couldn’t practice such activity neither inside nor outside Sudan.“

“We are proud to create a better reality for the next generations. Now that the conditions are more conducive, we will perform better than before, and we want support and encouragement,” Fadlallah said.

Joyous spectators repeatedly chanted “civilian rule, civilian rule”, expressing their happiness about the ousting of former President Omar al-Bashir’s regime and the level of freedoms the revolution has brought about, ending oppression, injustice and the deprivation of basic rights.

Most of the spectators were not fans of one particular team. They came to encourage all players. Ahmad al-Tayeb, one of the attendees, said he is proud and happy to see women play football, all thanks to the people’s revolution. “Without the revolution, we wouldn’t be here seeing our women, who suffered for years under the former regime, in the stadium. I was astounded by their excellent performance.”

Among the spectators of the match that ended in a draw, Sudan’s Minister of Youth and Sports, Walaa Essam al-Boushi. In a statement after the game, al-Boushi said that “putting a sports policy” in place and “caring for women” in general is among the “priorities” of Sudan’s new 18-member cabinet led by Prime Minister Abdalla Hamdok.

“At the African level, we are the last country to establish a women’s football association. And at the Arab level, Sudan and Yemen are at the bottom of the list. We are joining those who started before us by activating our participation regionally and internationally to reach the World Cup,” Hussein said.

However, this achievement was attacked as a deviation from religion by Salafist groups in Sudan, who criticised Sudanese women playing football. Abdel Hay Youssef, a famous Salafist cleric close to the former Bashir regime issued a fatwa accusing Walaa Essam al-Boushi, Sudan’s Minister of Youth and Sports of apostasy.

In one of his Friday sermons in a mosque in the Jabra suburb of Khartoum, he described women’s football as a “vice, debauchery and deviation from religion” and he harshly criticised the minister accusing her of being “rogue” deviating from the Islamic religion for allowing the launch of the women’s football league in Sudan.

Al-Boushi rejected the accusations of the Salafi cleric and described him as an “extremist”. She stressed that the case shall be decided upon in the courts and said that she had filed a lawsuit against the cleric. The cabinet backed the minister, renewed its confidence in Al-Boushi and stressed its support for her.

Haider Ibrahim Ali, a Sudanese thinker and director of the Center for Sudanese Studies, believes that the current confrontations between Salafi and social change currents, led by the revolutionary forces, are a result of a deliberate plan by counter-revolutionary forces from the old regime.

In an interview with AlAdwaa.online, Ali explained that these forces are defending their interests linked with the old regime through radical expressions and rhetoric that could lead to social and religious polarisation aimed at disrupting the revolutionary movement in the country.

“What Salafi groups are doing, […] is an integral part of the counter-revolutionary campaigns.”

Ali said that “what Salafi groups are doing, led by Abdel Hay Youssef and other Salafi preachers, is an integral part of the counter-revolutionary campaigns that aim at preserving the interests of counter-revolution persons on the one hand, and on the other hand, they aim at hindering the rise of new social currents represented by the youth and women of Sudan who took to the streets and led the December Revolution”.

He added that the Sudanese revolution stands for openness and against the obscurantist religious forces, that have used religion to stay in power and impose their views and perceptions. It is only natural that these forces try to resist the revolution’s path and curb it, Ali concluded.