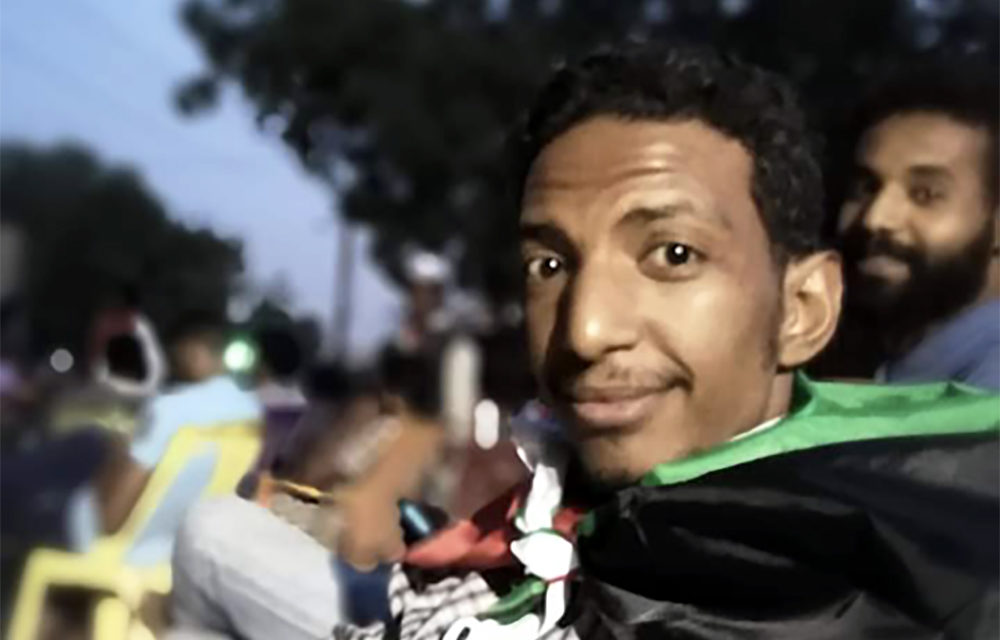 On December 19, 2018, a protest and a fire sparked a movement that changed the course of Sudan’s history. Young people, like Fki Ali, played a vital role to bring about this change.

Fki Ali is 27 years old and lives in Sudan’s capital Khartoum. Ali inspired several young people through his social media posts about the dreams of young people and his aspirations for a better Sudan.

He initiated ‘The Three Men’s March’ that encouraged many other young people to take their frustrations and hopes to the streets.

During ‘The Three Men’s March’ protest at Al-Gandool Station, one of the biggest bus stations in Khartoum, where Ali and his two companions shouted “long live the revolution, long live Sudan”, the police arrested the three.

Ali was only released on April 11, 2019, when a massive crowd of people marched to the ‘Kober’ jail to free all political prisoners following the fall of Sudan’s President Omar al-Bashir.

AlAdwaa.Online’s Alaa Eliass spoke with Fki Ali about his role during the protests and his aspirations:

Q: Ali, why did you go through with ‘The Three Men’s March’, well aware of the risks?

A: At that time the Sudanese Professionals Association was officially announced as the formal body for the Sudanese Revolution.

They gained people’s trust because they considered it a coalition of professionals and nontraditional politicians. People were fed-up with all non-worthy old Sudanese political opposition parties, and this time they surely wouldn’t follow them.

I remember that the SPA announced a peaceful march on December 25, which was very successful. The next march was on December 31, but it wasn’t as successful as the first one.

So I met with my friends, and we concluded that for this protests to develop into a revolution, the marches should never stop – at least there should be one march every week to exhaust the security forces.

The idea seemed very smart, we spread it on social media, and we gained a lot of attention from people, which convinced us, even more, to go through with it.

The day the march took place, I got up early, went to the station where I met my friends, and we started to chant our revolution slogans. Security officers promptly arrested us.

Q: Sudan has undergone significant changes – changes gained through countless sacrifices such as the months of detention you had to endure. Are you satisfied with the developments?

A: I’m not going to lie and say that I’m completely satisfied with everything that has happened until now. But I feel some comfort because I have seen how powerful the Sudanese people are when they unite and what they can accomplish together.

I firmly believe that the Sudanese people can guard their revolution against the greed of some of the army’s generals in power, and the opportunism of some politicians better than after what occurred in Sudan in 1964 or 1985.

I certainly don’t know what will happen in the near future, but I am sure that we are on the right path.

Q: And what are your plans now, how are you contributing to keeping the revolution on the right path?

A: My role after the revolution, now? I am trying to keep spreading awareness, and I am using different tools for that, whether it is social media or live forums.

I am also trying to support the transitional government because many parties now are betting on the failure of our revolutionary government.

I aspire to see my country Sudan living in peace again, with no wars, no political prisoners, no poverty and no human rights violations. In conclusion, I want Sudan to be great again!